Ejecta Projects is excited to present Panoramas, a two-person exhibition featuring paintings, drawings and collages by Ann Tarantino and Paul Manlove. Although they work in different media with divergent approaches to abstraction and representation, Tarantino and Manlove both depict landscapes and the built environment from aerial perspectives. Manlove’s paintings and drawings from his series titled Drones present the tight patchwork of lawns and structures characteristic of old Central Pennsylvania towns and cities, and he considers how these familiar views can be seen anew from above. Tarantino also takes inspiration from aerial photographs and examines sprawling urban and suburban spaces.  Like Manlove’s reflections on the violations of privacy with drone technology, particularly how all spaces are documented, accessed, and monitored through cameras, drones, and GPS, Tarantino’s collages also convey perspectives about power and place.  She alludes to the occupation of spaces through architecture, flags, as well as the lights and signs of commerce.  Tarantino’s and Manlove’s panoramas vehemently challenge notions of conventional landscapes — unobstructed vistas of unpopulated nature — to reflect on how the current environment cannot be uncoupled from relentless development and a seemingly insatiable consumption of resources and spaces.

Ann Tarantino works across drawing, painting, installation, and site-specific works of public art. Her work has been exhibited widely in the US and overseas, and has appeared in settings ranging from museums and galleries to botanical gardens and city streets. Recent exhibitions and projects include public commissions for sites including the Pittsburgh International Airport and the New York City Department of Transportation. Her recent work is influenced by her time living and working as a Fulbright Core Scholar in São Paulo, Brazil, and explores the human experience of inhabiting landscapes and the visual languages, such as flags and lines, used to communicate within those landscapes. She graduated with an honors degree in Visual Arts from Brown University and an MFA in Drawing and Painting from The Pennsylvania State University.

Paul Manlove (b. 1978, Harrisburg) received a B.F.A. from Millersville University (2001) and an M.F.A. from Brooklyn College, N.Y. (2004). In addition to his current teaching position at Penn State Harrisburg, Manlove has held visiting and full-time faculty appointments at a number of American colleges and universities including Brooklyn College, Millersville University, and Elizabethtown College. Manlove has also received the Charles G. Shaw Painting Award from Brooklyn College (2003) and a teaching fellowship at Brooklyn College under William T. William’s (2002). Manlove debuted his work in NYC in 2002, and has shown nationally in California, Pennsylvania, Baltimore, Virginia, New York and Connecticut.
CURRENT EXHIBITION 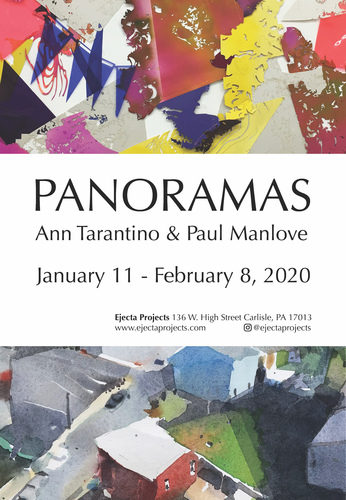